And so it begins…

I got to town today late afternoon, picked up my tickets for the shows I had lined up so far, and then headed to my first screening, where I found… wait for it… a line that was literally three blocks long. It was like a voice from on high shouted at me “Welcome to a film festival, rookie!” Luckily, I quickly found out this is par for the course and it’s nothing to worry about. The lines are caused by 1) everyone wants to arrive to screenings early because seats are first come/first serve and sitting in the front row sucks, and 2) every theater used in the film festival is tightly booked and often one screening doesn’t let out until 20-25 minutes before the next one starts. So when people arrive to a show an hour (or more) early, and can’t start getting in until shortly before show time, well, that’s how you get a three block line.

But, I had a ticket, so nothing to worry about. Or so I thought. Pop quiz: you know what sucks worse than the front row? Sitting in the last seat on one side of a tightly packed, sold out show, and not having enough room to angle your whole body towards the screen. So instead I watched my first TIFF movie with my neck craned at a 40-degree angle for over two hours. Luckily, the movie was great, and the director & producer were on hand to introduce the film as well as take a few questions afterwards. 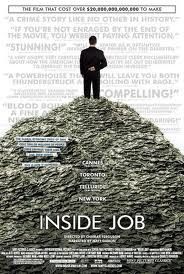 What is it? A scathing documentary about not just the global financial meltdown of 2008, but how every bad decision our economic leaders made over the last three decades directly led to our current financial reality.

Director: Charles Ferguson—his only previous film was 2007’s Oscar-nominated documentary No End in Sight, about the botched handling of the Iraq War by the Bush administration.

Notable Cast: Matt Damon narrates, and he did so “for well under his market value,” as Ferguson put it when introducing the film to the TIFF audience.

Thoughts: First thing’s first: See this movie. When Ferguson spoke for a bit to the TIFF audience prior to the screening, he said that his motivation for making the film was that very few people seemed to understand the origins of our global financial meltdown, and that most people viewed it as some sort of accident. Ferguson, who received his PhD from M.I.T. in political science & economics, knew the reasons behind what happened, and, more importantly, knew they were relatively easy to understand, if only someone were willing to thoroughly explain them. Ferguson also commented that he wanted to make a film that didn’t belong to any political party, and he succeeded. Every President of the last thirty years gets spotlighted on several bad decisions.

Inside Job uses its running time to do two things. Firstly, through Damon’s narration and interviews with several academics, an incredibly detailed (yet easy to grasp) account of exactly how this happened begins to emerge. Secondly, and more entertaining, Ferguson uses new interviews and archival footage of the people that screwed us, and asks them the tough questions. Sadly, most of them refused to be interviewed, which the film uses for comedic effect. (The producer told the TIFF audience that she wouldn’t accept people simply not responding to her requests as a “no.” Instead, she hounded them until they actually declined to be interviewed, so their refusal to take part was on the official record.) Amazingly though, a handful of people did allow themselves to be interviewed, such as one of Bush’s financial advisors who stepped down just two months before the crash because, as he says, “one of my textbooks needed revising.” You might think that would be one of the best quotes from the film, but it’s not even close. Just wait until you see footage of Michigan senator Carl Levin brutally grilling an AIG executive during a congressional hearing. The amount of squirming some of these people do on camera as Ferguson asks them uncomfortable questions is just one of the many rewards of the film.

But the really great thing about this film isn’t just that the subject matter is handled thoroughly and intelligently, but that it exhibits true filmmaking technique to get its ideas across. When the film is covering the “greed is good” glory days of Wall Street in the 1980s, Peter Gabriel’s “Big Time” is being pumped out at deafening volumes. In an interview with a pre-scandal Elliot Spitzer, Ferguson has him comment on the “vices” of Wall Street moneymen spending vast sums on prostitutes, which Spitzer smirks and laughs at. In a movie that should be anything but comedic, Ferguson still understands how to use humor to great effect. The pacing of the movie feels like a Hollywood action movie, except the villains win—they took over the world and left it for dead. It’s said that those who don’t understand history are doomed to repeat it; well, if the current financial status quo isn’t something you’re eager to see repeated, then you owe it to yourself to see this movie.

On Tap for Tomorrow: The red carpet premiere of Trust (a Michigan-filmed domestic drama starring Clive Owen), and my first volunteer shift.
ALSO, check out my latest review for annarbor.com here.
Posted by The Third Man at 6:23 PM
Email ThisBlogThis!Share to TwitterShare to FacebookShare to Pinterest
Labels: Toronto International Film Festival (TIFF) DIary